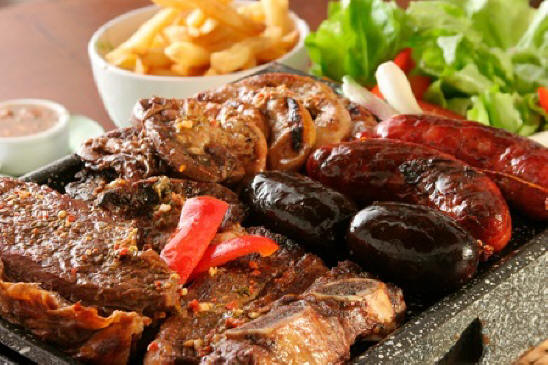 In Argentina, Paraguay and Uruguay some alternatives are the asado al disco and asado al horno de barro, especially in the countryside. The recipe doesn't change, only the way of cooking the meat and offal. In the asado al disco the worn out disc of a plough is used. Being metallic and concave, three or four metallic legs are welded and with hot coal or lumber below it is easily transformed into a very effective grill. Meat and offal are put in spiral, in such a way that the fat naturally slips to the centre, preserving the meat for being fried. Chili peppers and onions are usually put next to the edge, so that they gradually release their juices on the meat. The asado al horno de barro differs from traditional asado, as an horno (adobe oven) is used. These primitive ovens are a common view in Argentine estancias, and their primary function is to bake bread, but they are well suited for roasting meat. Pork suckling and, less commonly, lamb are served, as they are more unlikely to get dry. Though not technically a grill, it is a very traditional way of cooking that still requires the great skills of an asador and the gathering of family and friends, which are the essence of asado. Moreover, the smoky flavour and tenderness of this dish are very appreciated.