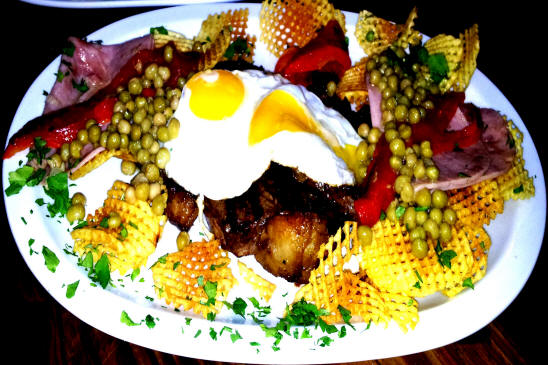 Asado is a term used both for a range of barbecue techniques and the social event of having or attending a barbecue in Argentina (where it is considered the national dish), Brazil, Chile, Colombia, Paraguay and Uruguay. In these countries,asado is a traditional dish and also the standard word for "barbecue". An asado usually consists of beef alongside various other meats, which are cooked on a grill, called a parrilla, or an open fire. After appetizers, costillas or asado de tira (ribs) can be served. Next comes vacío (flank steak), matambre and possibly chicken and chivito (goatling). Dishes such as pamplona, pork, and Patagonian lamb are becoming more frequent, particularly in restaurants. An asado also includes bread, a simple mixed salad of, for instance, lettuce, tomato, and onions, or it could be accompanied with verdurajo (grilled vegetables), a mixture made of potatoes, corn, onion, and eggplant cooked on the grill and seasoned with olive oil and salt. Beer, wine, soda, and other beverages are common. Dessert is usually fresh fruit. Another traditional form to mainly roast the meat, used in Patagonia, is with the whole animal (especially lamb and pork) in a wood stick nailed in the ground and exposed to the heat of live coals, called asado al palo. The meat for an asado is not marinated, the only preparation being the application of salt before and/or during the cooking period. Also, the heat and distance from the coals are controlled to provide a slow cooking; it usually takes around two hours to cook asado. Further, grease from the meat is not encouraged to fall on the coals and create smoke which would adversely flavour the meat. In some asados the area directly under the meat is kept clear of coals. The asado is usually placed in a tray to be immediately served, but it can also be placed on a brasero right on the table to keep the meat warm. Chimichurri, a sauce of chopped parsley, driedoregano, garlic, salt, pepper, onion, and paprika with olive oil, or salsa criolla, a sauce of tomato and onion in vinegar, are common accompaniments to an asado, where they are traditionally used on the offal, but not the steaks.